Removing wildlife is sometimes easier said than done. In this case, the study tells the story of raccoon removal and attic renovation in Malvern. The home in question suffered multiple invasions of raccoons because the roof was severely damaged. Raccoons are common in suburban neighbourhoods and they will always find a way back if they can find an opening.

Here, we removed raccoons a few times before completely renovating the attic and excluding the roof. Our comprehensive service finally rid the home of these pests and should protect it for many years to come. For affordable wildlife removal and proofing services, you can count on, call Wildlife Shield: 647-560-3988. 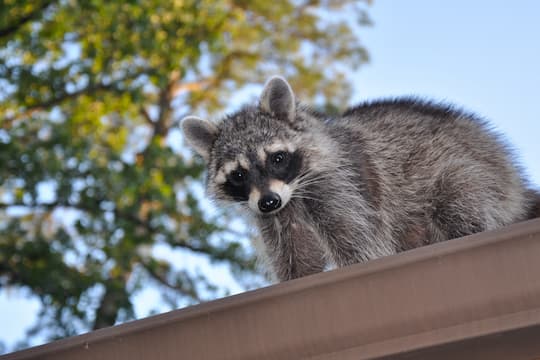 Malvern is a suburban, multicultural neighbourhood in Scarborough, Toronto. Sitting north of the 401, it borders the Toronto Zoo to the east, Markham road to the west, and Finch Avenue to the north. Malvern was a farming community until the 1950s when the Canada Mortgage and Housing Corporation reconstructed the area to provide Canadians with affordable housing. As such, the neighbourhood consists mostly of single-family homes and schools that were built many decades ago. Today, Malvern has a population of over 44,000 people with more than 60 different cultures, roughly half of which are of South Asian and Caribbean origin.

Malvern’s homes are susceptible to wildlife because of their age and location. The neighbourhood has had time to mature, providing animals with hedges, trees, and other natural hiding spots. Roofs, decks, and sheds have also had enough time to deteriorate, giving way to raccoons, skunks, and other pests. The density of the neighbourhood also means that there is plenty of food to go around, such as garbage and birdseed. 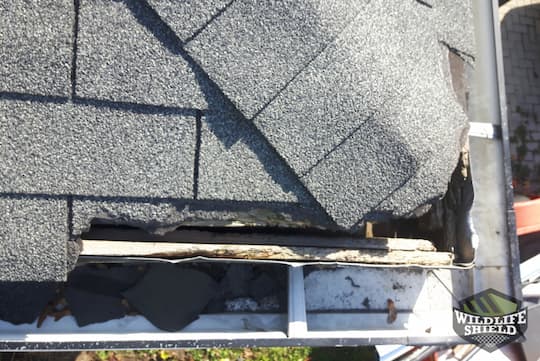 During the first visit, this Scarborough property was closely examined for points of entry. The homeowner, in this case, reported that raccoons had been living on their property for many years and that they could hear them making noise in the attic. The technician on site then checked the roof for gaps and holes that the animals could have been using to get inside.

Raccoons frequently break into people’s homes by pushing up on the soffits, tearing open the roof’s edge, and climbing into the ventilation. These are smart animals with highly dexterous paws. They can smell the food you keep in the house, and sense that the attic is warm by the air that escapes the vents. Raccoons will absolutely take advantage of a damaged roof to get inside. 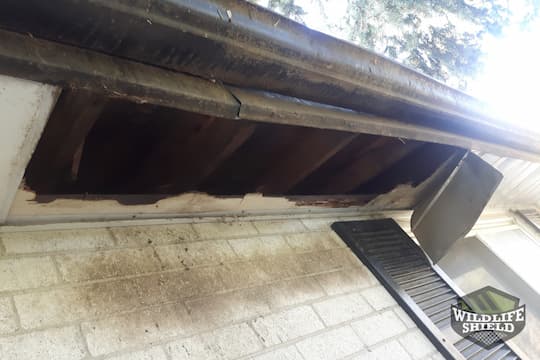 The soffits were torn off, exposing the attic to wildlife. 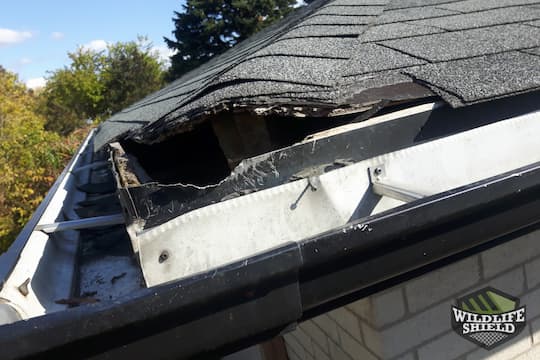 Raccoons make holes like this to enter the attic inside.

In this case, the technician found large holes in the home’s soffits and drip edge. The roof was decaying, and raccoons were likely taking advantage of its weakened state. Piles of raccoon droppings were found on different parts of the roof, and the shingles were damaged. The technician also noted that the roof had vents left exposed, which animals could soon break as well. 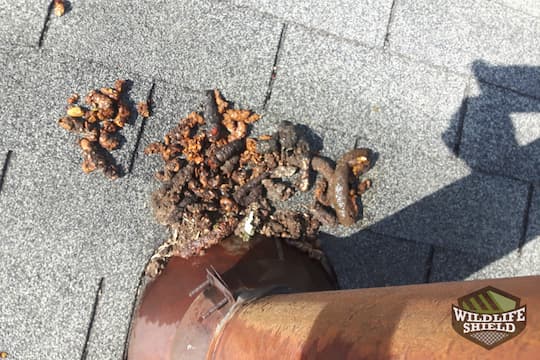 Raccoons tend to defecate in the same places every time, creating piles of hazardous waste.

No matter the situation, the technicians at Wildlife Shield perform thorough inspections, checking every nook and cranny for vulnerabilities and potential entry points. This allows them to provide a treatment that is more strategic and therefore more effective. Understanding the causes of an infestation, as well as its extent, allows them to provide treatments that are more strategic and therefore more effective. 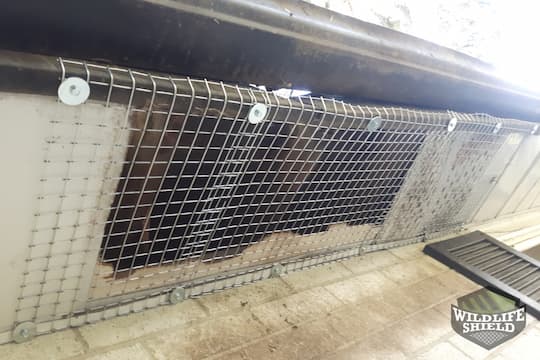 Excluding the soffits with galvanized steel mesh will keep pests out.

Following the inspection, the technician on duty recommended that the roof be excluded from raccoons immediately. This would involve screwing a galvanized steel mesh and metal flashing into the soffits and edges of the roof to keep the pests out. The roof’s vents would then also be protected by capping them with mesh. Galvanized steel mesh is highly durable and strong enough to resist the pulling, chewing, and tearing of wildlife. A one-way door would then be installed at an opening in the roof to let the animals out safely but block their return. 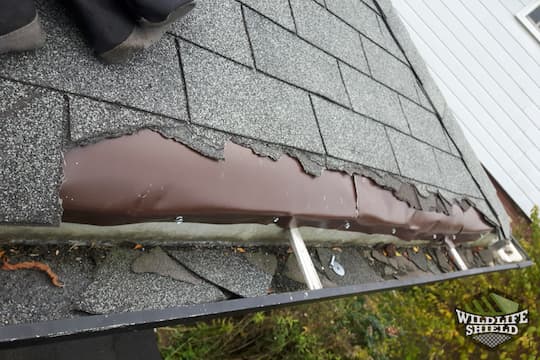 Some parts of the roof’s edge was strengthened with metal flashing.

The homeowner agreed to exclude the animals, so a total of 47 feet of roof line was protected. The technician covered the holes in the soffits and reinforced significant weak spots so that no more animals would get inside. He also cleaned up all the droppings he could find and disinfected the roof to remove germs and odours. A one-way door was installed along the roof’s edge to let the animals out, which would take a week or two. 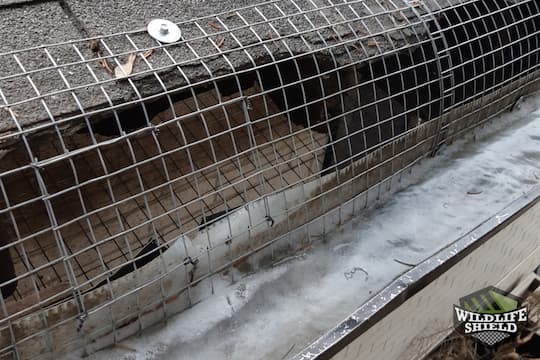 Mesh was placed along the roof’s edge as soon as the door was removed.

A few weeks later, as predicted, the raccoons were gone. The homeowner reported that they had stopped making noises in the attic. A technician then returned to the property and removed the one-way door. In its place, he put mesh. No more raccoons would be able to use the opening they created.

Follow-up Inspection: Why are they back?

Weeks after the exclusion work was performed and the one-way door was removed, the owner of this Scarborough home called us back to say that they were hearing raccoons again. A technician promptly returned to the property to inspect. Wildlife Shield provides warranties on all of its services, so if contractual pests return during the warranty period, we come back and remove them again. 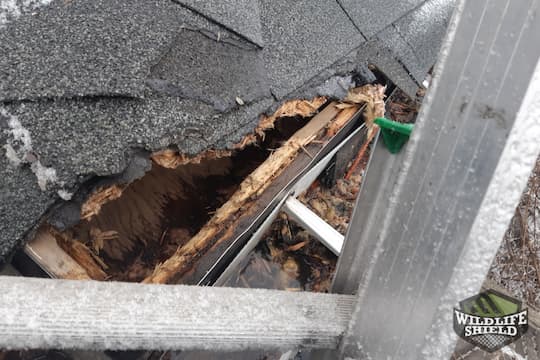 Some pests come right back. The raccoons in this case broke back into the attic by tearing at the edges of the roof. 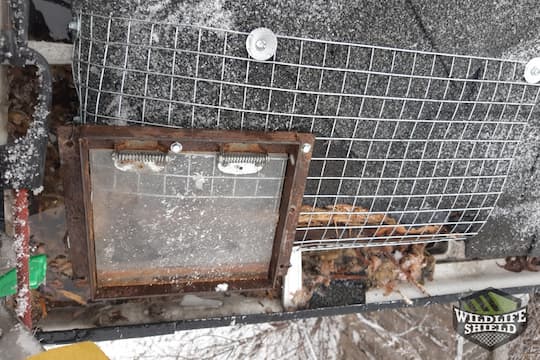 A new one-way door was installed to the new entry-point.

In this case, raccoons breached a different part of the roof that had not been excluded. The animals tore through the edges of the roof and found their way back into the attic. All the previous work that had been done was still intact. To remove them, the technician installed another one-way door to the new entry point and recommended waiting a few weeks to let the animals leave. Given the state of the roof, the homeowner was urged to have the entire roof replaced or excluded.

Come winter, the door was removed, and metal flashing was placed where it was to prevent any further water damage in the attic. When raccoons and other pests make holes in the roof, they expose the attic to the elements. This increases energy costs and gets the attic wet, which causes mold.

Mold will not only damage the insulation but decrease the quality of the air in the home. Pests will also urinate and defecate in the attic, contaminating the air and attracting other pests to the property. In this case, it was important that wildlife be removed and excluded as soon as possible so that no further damage would be done inside. 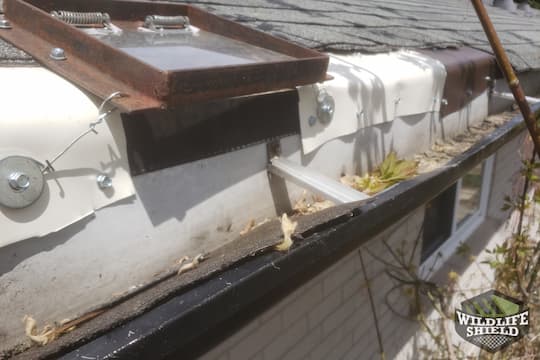 Another door was installed in the spring. Spring invasions are common as this is when females need a place to raise their young.

Despite this second removal, raccoons could be heard again in the spring. Once again, the raccoons had found another part of the roof’s edge that they could exploit. Had the homeowner agreed to exclude the entire roof, this would not have happened. A one-way door was screwed into the new entry point and the animals were gone within a few weeks. 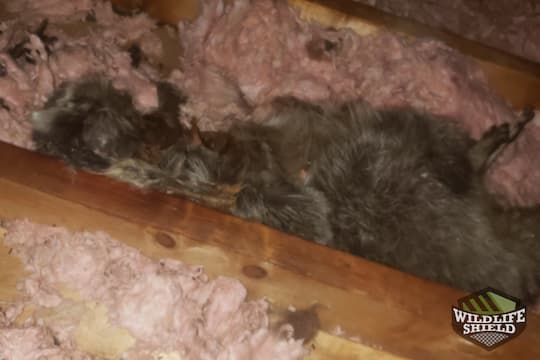 Raccoons passed away in the insulation of the attic.

This time, however, the technician had a look inside the attic. Raccoons often have babies in the spring, so it is important to check if there are any. Wildlife Shield never separates a mother raccoon from her young. In this case, no babies were found, but two dead raccoons were found lying in the insulation. The technician then recommended having the insulation replaced and told the homeowner to give us a call if any more noises were heard. At this point, the owner of this Malvern residence was interested in renovating the attic and the roof; too much damage had been done. 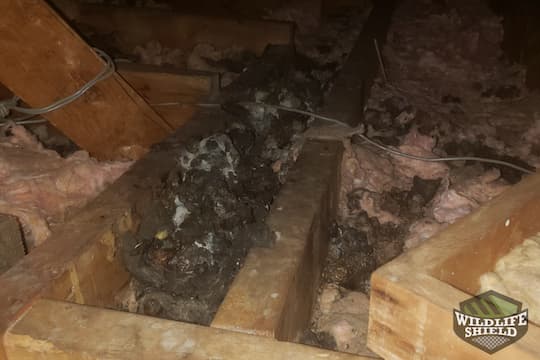 Large piles of feces were found throughout the attic.

About a month later, the raccoons were gone, and a technician removed the one-way door. During this visit, the attic was inspected more closely for full remediation. A sister company of Wildlife Shield offers full attic remediation services, so we were happy to provide the homeowner with the service.

The insulation, in this case, was severely damaged from years of raccoon invasions. Feces were found scattered throughout the attic along with the dead raccoons. The insulation would need to be removed, then the attic would need to be disinfected before installing any new insulation. Rafter vents and a new parapet wall would also be installed to allow for more airflow and the placement of a thick new layer of insulation. 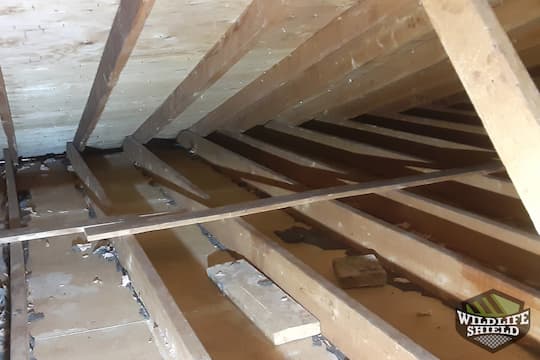 Once the insulation is removed, the attic floor can be disinfected.

As per our recommendations, the attic of this Malvern home was fully remediated. Our technicians safely removed the contaminated insulation and disposed of it responsibly, then cleaned every surface of the attic with a commercial-grade fogger. All odours and pathogens were removed. Next, rafter vents were installed, a parapet wall was built around the hatch, and a new layer of cellulose insulation was installed. The attic was rendered clean and highly energy efficient. 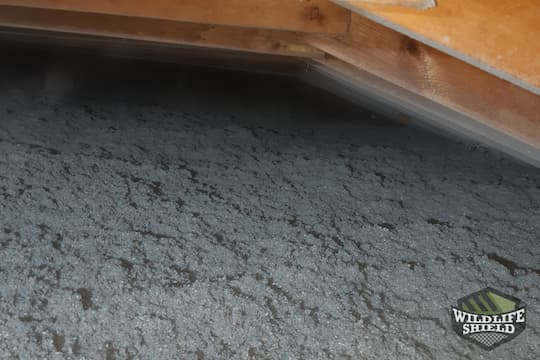 A follow-up with the homeowner some weeks later revealed that they had their roof re-done. This, along with the exclusion of the roof’s vents and the attic work performed, would help keep the pests out for good.

This Malvern case demonstrates the importance of maintaining one’s roof and protecting it from wildlife. Raccoons are persistent pests that will do whatever they can to get back into their homes. It takes comprehensive exclusion and cleanup to keep these pests out. When removal wildlife, it is imperative that the entire structure be excluded so that they do not return. If there are wild animals on your property, or if you are interested in keeping them out, call Wildlife Shield. Our technicians are highly experienced in all forms of animal control and exclusion. Call Wildlife Shield today for safe and reliable pest control services: 647-560-3988.