Anyone can get pests. The following case study tells the story of wildlife removal and rat extermination in Guelph, in which a large century home had multiple different species invading its property. Mice, squirrels, raccoons, and rats were all making themselves at home in the shed and the attic. Despite its tremendous value, this was an aging property that presented the animals with an opportunity to live indoors.

Here, we removed the pests, disinfected after them, and performed a thorough wildlife-proofing of the premises to keep them out. The attics were renovated with new insulation. Our comprehensive wildlife removal services rid the home of these animals and should keep it safe for years to come. Call Wildlife Shield for wildlife removal and exclusion services in Guelph and the GTA. 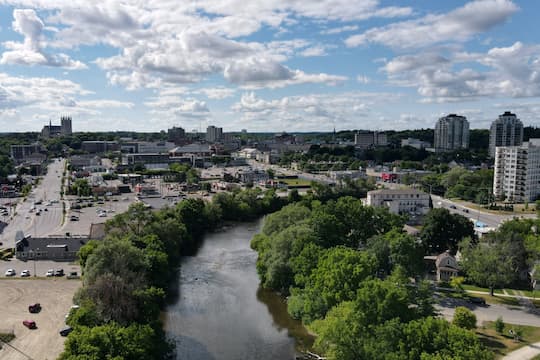 Guelph, like many of Ontario’s cities, is home to an abundance of pests and wildlife.

Guelph is a charming city in southwestern Ontario with a population of roughly 130,000. Located 28km east of Kitchener and 100km west of Toronto, Guelph is surrounded by farmland and conservation areas. Major industries within the area include advanced manufacturing, environmental management, and technology. Guelph is home to nearly 30,000 university students and has some of the lowest crime rates and unemployment rates in the country.

Guelph’s neighbourhoods are susceptible to wildlife because of their age and location. Guelph is an old city with plenty of parks, yards, and green spaces for pests to find food and shelter. The Speed and Eramosa rivers act as highways for animals to get around. Many roofs, decks, foundations, and sheds in Guelph have had enough time to deteriorate, giving way to pests like raccoons and squirrels.

Inspection of the Shed

During the first visit, the storage shed of this Guelph property was closely examined for signs of wildlife. The homeowners, in this case, we’re interested in renovating the structure and recognized that its location was attractive to pests. The shed was surrounded by trees and had a turret on its roof that could be accessed by squirrels. Thus, the technician on site checked the shed for holes or gaps that animals could use to get inside.

Pests will take advantage of quiet, ageing structures for their shelter and proximity to food. Rodents will dig through the foundation or squeeze through a crack in the wall. Weep vents and wall vents often have openings that are wide enough to let mice in. Squirrels and raccoons commonly break into attics by exploiting the weaknesses they find on the roof. These include gaps in the drip edge that has warped over time, loose soffits, and plastic roof vents that can be chewed or torn open.

As rodents, squirrels have incredibly sharp, strong teeth that can chew through wood, plastic, and aluminum. Raccoons have dexterous paws, and they are strong enough to tear their way through the roof. These animals can sense that the interior is warm and will absolutely take advantage of its age to get inside.

The technician in this case found many gaps and holes in the structure of the shed. Two windows had cracks in their frames and roughly six feet of gaps were found between the building’s foundation and siding. Raccoon droppings were scattered throughout the shed and several holes were visible in the interior walls and floor. The turret on the roof also had holes in it, with evidence of raccoons living in their peak. Squirrels were suspected to be living in the attic and rats were burrowing in the ground outside. 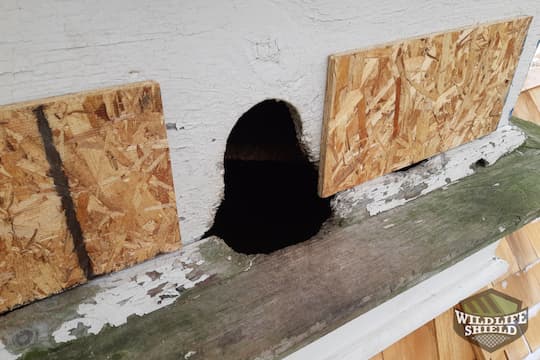 Animals will take advantage of the holes and openings found on quiet structures such as the shed or roof. The opening in this case was wide enough to fit both squirrels and raccoons. 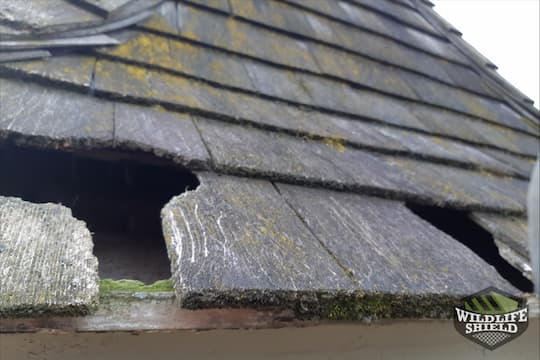 Squirrels have incredibly strong teeth that can chew through shingles, plastic, aluminum, and other wooden materials. 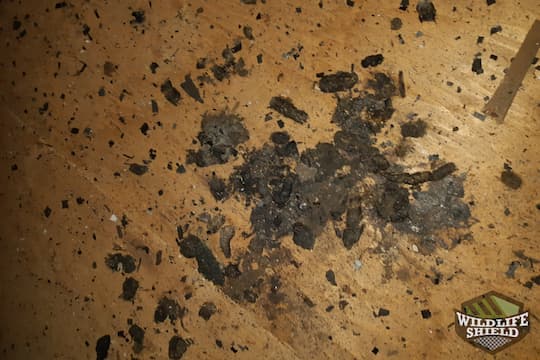 Animal droppings should be removed as soon as possible, and the surfaces they contaminated should be thoroughly disinfected. Raccoons and other wild animals pass dangerous diseases in their feces.

Following the inspection, the technician recommended that the shed be excluded from top to bottom. This would mean sealing and blocking every hole, crack, and gap found to keep pests out. A custom-made, galvanized steel mesh would cover holes to prevent any more animals from getting inside. Galvanized steel mesh is strong enough to withstand animal chewing and tearing. One-way doors were recommended to let the squirrels and raccoons out of the roof. These consist of plastic and metal doors that would be attached to the entrances of the animal dens. One-way doors swing outward, letting the animals out safely but blocking their re-entry.

In addition to the exclusion, the technician recommended cleaning and disinfecting the shed because the droppings inside could be dangerous. Animal droppings not only smell terrible but contain harmful pathogens that can make humans and their pets very sick. These may also contain parasites, which can be passed along to any cats or dogs that go outside. Wildlife Shield offers professional sanitation services in which we safely remove animal matter and disinfect the area, removing odours and germs in the process.

The homeowners agreed to evict the animals and pest-proof the shed. Over the next few days, members of the Wildlife Shield team sealed the holes that were found in the roof’s edge, the shed’s interior, and the foundation outside. A second technician was present so that the roof could be reached safely. Several feet of mesh were screwed into the shed’s wooden structure. Using commercial-grade disinfectants, the technicians on site removed the fecal matter inside the shed and cleaned the surrounding surfaces. This removed the odours that were present and made the shed safe for the owners to use. Rodent bait stations were placed on the outer sides of the shed to suppress the rat population. 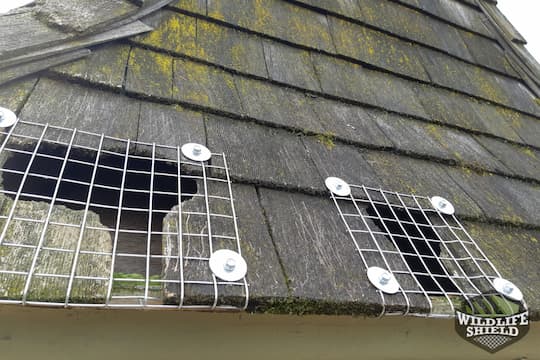 Galvanized steel is an excellent material for pest-proofing. It’s weather-proof and tough enough not to break when squirrels try to chew through it or when raccoons tug at its mesh. 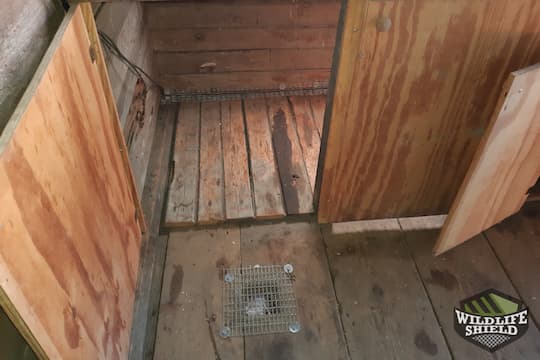 Sealing the gaps and holes in the shed would keep rats and other animals from getting inside and making another mess. 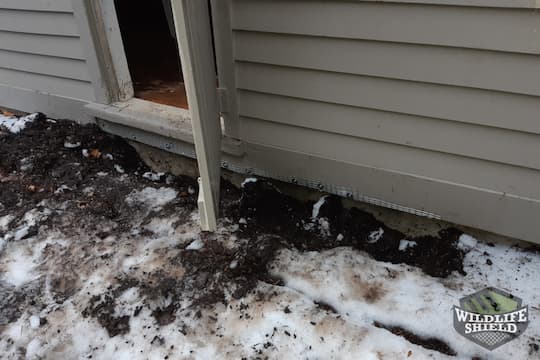 Rats are good climbers and burrowers, so it is important to keep the foundation and bottom perimeter of any given structure to keep them out.

Once all entry points were sealed, the technicians on-site installed a large one-way door to the last remaining hole in the roof’s edge. This door consisted of a plastic flap for the raccoons to push outward and a mesh tube for the squirrels to crawl out. Raccoons usually leave their dens within a few days to find food. Squirrels may take a few weeks. Once out, they would find shelter elsewhere and the door would be replaced with mesh. 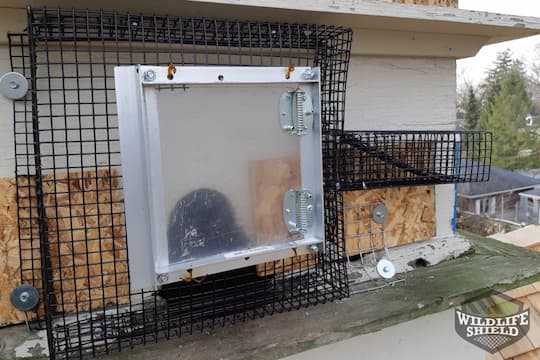 The technician on site built this combined, two-door system to let both the raccoon and squirrel out safely. The raccoon would push the flap open and the squirrel would crawl out the mesh tube.

More Pests in the Home

A few weeks later, in January, the pests in the shed were no longer a problem. The homeowners, however, gave Wildlife Shield a call when they heard animal noises coming from the attic of their home. This was a large attic with multiple different sections and some connectivity. Because it was winter, and the roof was high above the ground, a technician returned to the property and inspected the attic from the inside.

Hearing noises coming from the attic is a common sign of a squirrel infestation. Squirrels are noisy creatures that make a lot of scratching, scurrying, and squealing sounds in the early hours of the morning and again at sundown. These noises are amplified by the wide, empty space of the attic. Like the shed, squirrels were suspected to have entered the attic of this Guelph home by chewing their way through the roof’s edge.

Upon examining the roof from the ground outside, the technician on duty suspected that squirrels were getting into the attic through the roof’s turret. He then examined the attic’s interior to find evidence of the infestation. Fecal matter and squirrel nesting material were found contaminating the insulation within two attic sections. One nest was still active, with fresh droppings and debris surrounding it. Mouse feces were also found in the attic and wall voids. 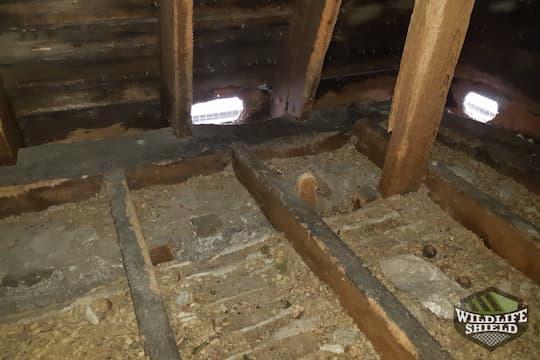 The attic showed signs of aging as well as animal damage. Large holes were found along the edges, allowing wildlife to crawl inside and infest the attic. 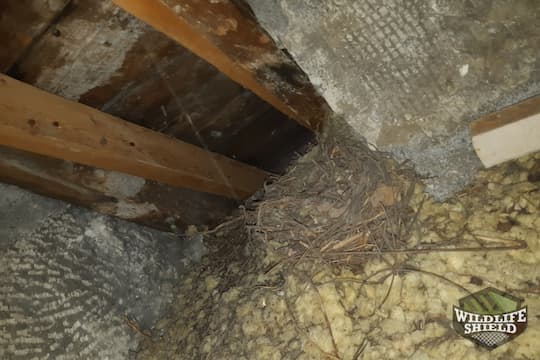 Squirrels build their nests out of twigs, leaves and branches. The technician in this case found a squirrel’s nest built in the attic’s insulation.

The technician recommended placing bait stations in the wall voids of the attic to eliminate the mice and installing a one-way door to evict the squirrels. Roughly 10 to 20 feet of mesh exclusion around the turret was recommended to keep pests out permanently. The homeowners were also encouraged to have the dirtied insulation removed and the attic spaces deodorized. The insulation could then be replaced, providing the homeowners with a clean, well-insulated attic free of pests. Wildlife Shield provides complete attic remediation services in addition to our pest removal, exclusion, and disinfection.

As per the technician’s recommendations, the attic of this Guelph home was fully remediated. Over 200 square feet of insulation was safely removed, and the attics were disinfected with a commercial-grade fogger. Next, a new layer of cellulose was blown-in, rendering the attic clean and energy efficient. Like the exclusion performed on the shed, the technicians on site sealed the cracks in the turret with galvanized steel mesh. Being so high off the ground, two technicians carried out the exclusion work to ensure each other’s safety.  A one-way door was installed at the entrance of the squirrel’s nest. 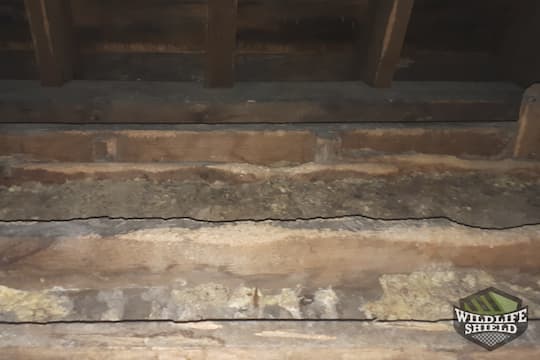 Removing the insulation allows for a fresh start. The attic was fully disinfected and readied for a new layer of insulation, free of animals and their debris.

A few weeks later, the one-way door was removed and the hole in the turret was sealed with galvanized steel mesh. The squirrels had left the attic. Over the next few months, Wildlife Shield continued to service the rodent bait stations placed outside. While pests living on the interior can be evicted and excluded, those living outside often require continued treatment to suppress their populations. Wildlife Shield offers ongoing exterior treatments for rodents in which we do not need to visit the interior of the home. 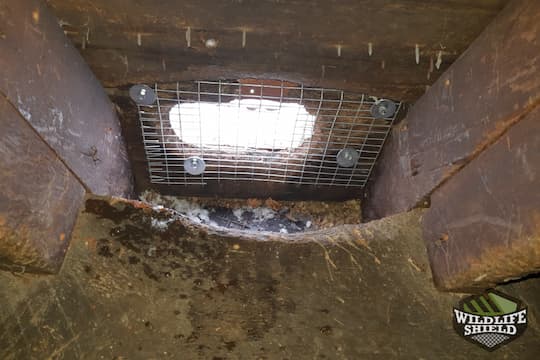 Squirrels, raccoons, mice, and rats are common in Ontario and will make themselves at home on any given property if there is an opening. This case demonstrates the importance of maintaining the structure of one’s home and guarding it against wildlife. Keeping the roof, foundation, and other exterior structures intact is the key to a pest-free home. If there are wild animals on your property, or if you are interested in wildlife-proofing your home, give us a call. We will perform a thorough inspection and provide you with a pest control program that works. Our technicians are trained, licensed, and insured for your satisfaction and peace of mind. Call Wildlife Shield today for affordable and reliable wildlife removal services in Guelph.